Comparing the somites of an embryo with teeth impressions on a piece of gum.

The Qur’an mentions that human development passes through a number of distinct stages.[1] These stages are descriptive of the embryo’s external appearance and have been assigned the following names:

And We (God) created man[2] from a quintessence (gentle extraction) of clay. We then placed him as a nutfah (drop) in a place of settlement, firmly fixed (i.e. the womb). Then We made the drop into an ‘alaqah (clinging form), and then We changed the clinging form into a mudghah (chewed-like form), then We made out of that chewed-like form, izam (skeleton, bones), then We clothed the bones with lahm (muscles, flesh), then We (ansha’ nahu), caused him to grow and come into being and attain the definitive (human) form. Blessed be God, the Perfect creator.

This article focuses on the term mudghah مُضْغَةً – the third stage of human prenatal development according to the Qur’an.

This article is based on a lecture delivered by Dr. Keith L. Moore at the University of Illinois, Chicago, USA (1990) titled Embryology in the Qur’an and the book Human Development as Described in the Qur’an and Sunnah (1994).

2.  The meaning of the term Mudghah

The Qur’an mentions the term mudghah مُضْغَةً as the third stage of human prenatal development. The word mudghah according to linguistic Arabic dictionaries has several meanings. The first meaning is “something that has been chewed by the teeth”[3,6]. A second meaning is incorporated in the derived meaning (ﻤﺿﻎ ﺍﻻﻤﻮﺭ) mudagh al-umūr which means “the small substances.”[4] A third meaning of mudghah, mentioned by some Qur’anic commentators, is “a piece of meat of a size that can be chewed.”[5]

3.   The transformation of the embryo into Mudghah 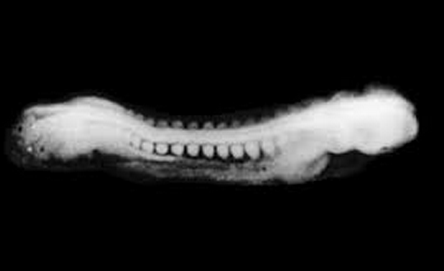 Figure 1. Photograph of embryo at the end of the ‘alaqah stage (age 24 to 25 days). Ten pairs of the 13 pairs of somites are easily recognized, but the embryo is still relatively straight and has a leech-like appearance. (Source: The Kyoto Collection).

The embryo at 24-25 days is finishing the ‘alaqah stage (Figure 1).  It changes into the mudghah stage at 26-27 days. The transformation from ‘alaqah to mudghah is in fact very rapid, and during the last day or two of the ‘alaqah stage, the embryo is beginning to develop some of the characteristics of the mudghah, e.g. the somites begin to appear and become a distinct feature of this stage (Figure 2).

Figure 2. Drawings of embryos during the fourth week. A, B, C, Lateral views of the embryos, showing 16, 27, and 33 somites respectively. A, The embryo in the last day of the ‘alaqah stage. B and C, Embryos in the beginning of the mudghah stage. (Source: The Developing Human, 4th Ed, 1988).

This rapid transformation is described in the Qur’an by the use of the conjunction fa ﻓ (“then, with no delay”). The word fa indicates a quick sequence of events:

4.   Description of the term Mudghah

When choosing terms for the stages in embryonic development, the term should be related to the appearance and the main internal features of the embryo. Therefore, the term mudghah should apply with the shape of a substance that the teeth have chewed, according to the first meaning we have given. The appropriateness of the use of the term mudghah has been indicated in modern embryology. It has been determined that after the formation of the embryo and the placenta, the embryo receives it nutrients and energy. Thus the growth process increases rapidly. The bodily masses, called somites, from which the bones and muscle of the back will be formed, start to appear. Due to the multitude of the bead-like structures or somites present, the embryo has the appearance of a substance that has been imprinted by teeth.

The application of the term mudghah in describing the processes of this period are described in the following sections.

4.1   DESCRIPTION OF MUDGHAH AS “SOMETHING THAT HAS BEEN CHEWED BY THE TEETH” 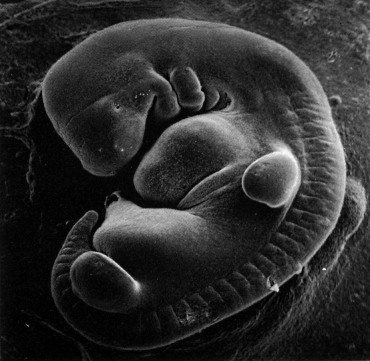 Figure 3. Photograph of an embryo around 28-30 days, during the mudghah stage of development. The embryo has a characteristic C-shaped curvature similar to the curved appearance of a substance which has been chewed extensively. The heart prominence is easily recognized. The ventrally-curled tail, with its somites, is a characteristic feature of this stage. Indentations are identified between somites, and with these indentations, the embryo resembles a chewed substance in its external appearance. (Source: Langman’s Medical Embryology.)

Figure 4. Comparing the appearance of an embryo at the mudghah stage with a piece of gum that has been chewed. A, an embryo at around 26 days showing several pairs of bead-like somites. (The Developing Human, Moore and Persaud, 5th ed., p. 79.) B, a piece of gum that has been shaped like an embryo and then chewed. Note how the teeth marks on the chewed substance resemble somites of the embryo. The somites represent the beginnings or primordia of the vertebrae.[7]

4.2    DESCRIPTION OF MUDGHAH AS A “SMALL SUBSTANCE”

As for the second meaning of “small substances” for mudghah, the embryo is approximately 1.0cm in length at this stage, and therefore very small. Thus the meaning “the small substances” applies in the sense of the embryo’s size. This is so because all human organs form during the mudghah stage as small buds.

4.3    DESCRIPTION OF MUDGHAH AS ” A PIECE OF MEAT OF A SIZE THAT CAN BE CHEWED”

The third meaning of mudghah as “a piece of meat of a size that can be chewed”, given by some Qur’anic commentators, applies again in regard to the size of the embryo. At this stage, the embryo is approximately 1.0cm in length, and this is approximately the size of a substance that would be chewed. The preceding stage of ‘alaqah, for example, is not a size to be chewed, since it is not more than 3.5mm in length.

4.4    DESCRIPTION OF MUDGHAH AS BEING PARTLY FORMED AND PARTLY UNFORMED

“Then out of a chewed-like substance partly differentiated and partly undifferentiated.” Surah Al-Ḥajj (The Pilgrimage) 22:5

The term mudghah مُضْغَةً is the third stage of human prenatal development according to the Qur’an. The description of the embryo as mudghah is remarkable if one considers that the embryo is extremely small, measuring no more than 1.0cm in length. As there were no microscopes or lenses available in the 7th century, doctors would not have known that the human embryo had this chewed-like appearance.

[2] The creation of the first man Adam.

[6] A Byzantine anathema recorded during Muslim conversions to Christianity reads: “I anathematize Muhammad’s teaching about the creation of man, where he says that man was created from dust and a drop of fluid [σταγόνος] and leeches [βδἑλλων] and chewed-like substance [μασήματος]…”

2 thoughts on “Embryology in the Qur’an: A description of the Mudghah Stage”