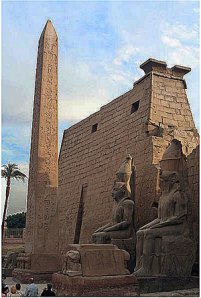 Granite obelisk towering over statues of Ramsses II in the Luxor Temple in Thebes (Luxor), Egypt

Controversy has prevailed since the European ‘Renaissance’ regarding the historicity of a certain Haman, who according to the Qur’an, was associated with the court of Pharaoh to whom Moses was sent as a Prophet by God. Haman is mentioned by name six times in the Qur’an and is referred to as an intimate person belonging to the close circle of Pharaoh, one who was engaged in construction projects. Western scholars have concluded that Haman is unknown to ancient Egyptian history. They say that the name Haman is first mentioned in the biblical Book of Esther, around 1,000 years after Pharaoh. The name is said to be Babylonian, not Egyptian. According to the Book of Esther, Haman was a counsellor of Ahasuerus (the biblical name of Xerxes) who was an enemy of the Jews. It has been suggested that Prophet Muhammad mixed biblical stories, namely the Jewish myths of the Tower of Babel and the story of Esther and Moses into a single confused account when composing the Qur’an.

This paper proposes to examine the various aspects of this controversy, primarily grounded in a source-critical analysis along with a literary comparison, in light of modern historical and archaeological research.

2 thoughts on “Historical Errors of the Qur’an: Pharaoh and Haman”